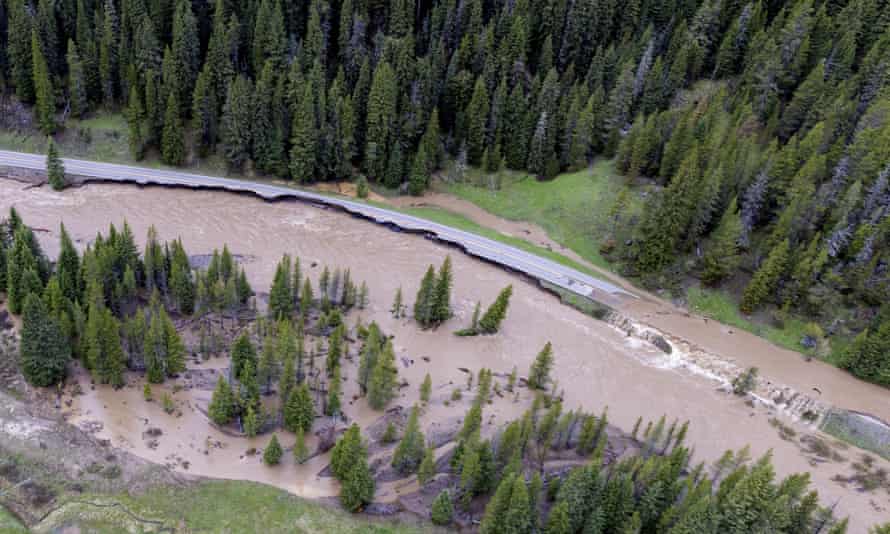 More than 10,000 visitors were ordered out of Yellowstone as unprecedented flooding tore through the nation’s oldest national park, washing out road and bridges, officials said on Tuesday.

The only visitors left in the massive park that straddles three states were a dozen campers still making their way out of the backcountry.

The park, which celebrates its 150th anniversary this year, could remain closed as long as a week, and northern entrances may not reopen this summer, said superintendent Cam Sholly.

“The water is still raging,” said Sholly, who said more wet weather was forecast this weekend that could cause additional flooding.

We will continue to communicate about this hazardous situation as more information is available. More info: https://t.co/mymnqGvcVB pic.twitter.com/S5ysi4wf8a

The park closed down this week in the face of extreme weather that caused major flooding after record levels of rainfall.

The surging floodwaters left a wave of wreckage, pulling houses into rivers and forced rescues by air and boat and sweeping an employee bunkhouse miles downstream. Remarkably, no one was reported injured or killed, and the waters have now begun to slowly receded.

The park largely sits in Wyoming, but extends to parts of Montana – such Park county, which includes Gardiner and Cooke City – that were badly affected. While individual extreme weather events can rarely be linked directly to the climate crisis, they are increasing in severity and frequency in the US and across the world as the planet warms due to human activities.

Yellowstone received 2.5in (6cm) of rain on Saturday, Sunday and into Monday. The Beartooth Mountains, north-east of Yellowstone, got as much as 4in (10cm), according to the National Weather Service.

Zachary Hoylman, Montana’s assistant state climatologist, said: “The flows in Yellowstone were the largest recorded by a very large margin.”

Hoylman said that while significant precipitation had been foreseen, the scale of the event was not expected.

“We had a late cool spring with slow snow melt and really wet conditions which were then followed by this really large precipitation event in a short period of time. That caused a big pulse of moisture.”

Park county residents were told their water may not be safe to drink. State and local officials in both Wyoming and Montana told the residents and tourists in the affected area to shelter in place.

Marshall Haley, a campground manager in Gardiner, Montana said while some were able to evacuate after heeding warnings of rising water levels, others remained trapped.

Haley said: “We’re on an island so to speak. Most of the motels were full, and the store’s going to run out of food pretty soon probably because no truck can get down here.”

In south-central Montana, flooding on the Stillwater River stranded 68 people at a campground. Stillwater County Emergency Services agencies and crews with the Stillwater Mine rescued people Monday from the Woodbine Campground by raft.

We were unable to send the article. A surgery center in Springdale sold for $2.6 million. Willow … END_OF_DOCUMENT_TOKEN_TO_BE_REPLACED

U.S. chip designer Qualcomm Inc on Thursday said its automotive business “pipeline” increased to $30 billion, up more than $10 billion since its third … END_OF_DOCUMENT_TOKEN_TO_BE_REPLACED