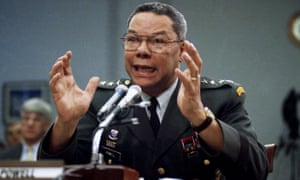 Joe Biden noted that he would soon be returning to the Oval Office to keep making calls to House members, encouraging them to pass the bipartisan infrastructure bill and the reconciliation package today.

“I want to say very clearly: if your number one issue is the cost of living, the number one priority should be seeing Congress pass these bills,” Biden said.

After concluding his prepared remarks, Biden did not take any questions from reporters, but he said he would do so after the two bills passed.

As of now, it is very unclear when that might happen. Some centrist members of the House Democratic caucus are still insisting they must see the analysis from the Congressional Budget Office before supporting the reconciliation package, and that report could still be weeks away.

The president and the first lady will soon leave to attend the funeral of former secretary of state Colin Powell. Stay tuned.

Joe Biden called on “every House member” to support the bipartisan infrastructure bill and the $1.75tn reconciliation package, as some centrist Democrats raise concerns about the latter.

The president argued that the reconciliation package would provide American families with “just a little more breathing room” by lowering their healthcare and childcare costs.

“Right now, we stand on the cusp of historic economic progress,” Biden said. “And passing these bills will say clearly to the American people: we hear your voices.”

“Let’s get this done”: President Biden calls on “every House member” to vote for the infrastructure and Build Back Better legislation. The House is set to vote on both bills Friday https://t.co/ZXJO6nFJCQ pic.twitter.com/2x5ln8xRTT

As the president spoke, it remained unclear whether the House would be able to hold its planned vote today on the reconciliation package.

Some centrist Democrats in the House are insisting they must see the Congressional Budget Office’s analysis of the bill before supporting it, but that report may not be available for weeks.

“I’m asking every House member, member of the House of Representatives to vote ‘yes’ on both these bills right now. Send the infrastructure bill to my desk. Send the Build Back Better bill to the Senate,” Biden said.

“Let’s show the world that America’s democracy can deliver and propel our economy forward. Let’s get this done.”

Biden celebrates strong October jobs report: ‘America is getting back to work’

Joe Biden celebrated the strong jobs report, saying the addition of 531,000 jobs in October showed that the US economy is recovering after suffering because of the pandemic.

“Today is another great day for our economic recovery,” Biden said in his speech at the White House.

“America is getting back to work. Our economy is starting to work for more Americans.”

The president noted new unemployment claims have fallen every week for the past five week and are now at the lowest level since the start of the pandemic.

Biden credited his administration’s vaccination policies and the passage of the $1.9tn coronavirus relief package with reinvigorating the US economy.

“This did not happen by accident,” Biden said.

Joe Biden will soon deliver remarks on the latest jobs report, which showed that US employers added a solid 531,000 jobs in October.

The strong number provides a boost to Biden, whose presidency has been battered by political setbacks in recent months as it struggles to enact his domestic agenda and suffered a major defeat in the race for governor of Virginia.

October’s job growth outpaced the 450,000 new jobs economists had predicted from the job market, mitigating fears of slow growth in the jobs sector after far fewer jobs were added in September than was expected.

The boost in jobs was expected after Covid cases and hospitalization rates declined in October.

Josh Gottheimer, a centrist member of the House Democratic caucus who previously demanded an earlier vote on the bipartisan infrastructure bill, indicated he was ready to vote for both bills today.

It’s time to stop delaying & start delivering on priorities to help our communities.

Let’s get this done.

“It’s time to stop delaying & start delivering on priorities to help our communities,” the New Jersey congressman said on Twitter.

But some of Gottheimer’s centrist colleagues have indicated they want to see an analysis from the Congressional Budget Office before voting for the reconciliation package.

HOYER leaves a meeting with moderates noting that their demand for a CBO score won’t be met in time for a vote today, simply saying “it cannot be done.”

Kurt Shrader, another centrist member of the House Democratic caucus, told CNN that there was “no resolution” to his concerns about the reconciliation package.

The Oregon congressman also would not say whether he would vote “yes” on the bill if the Congressional Budget Office released its analysis, which is one of centrists’ demands before a vote happens.

Blue Dog Dem Kurt Schrader tells me “we have no resolution that I know” as he left Speaker Pelosi’s office. This is not a good sign as Democrats are trying to put BBB on the floor today and Schrader remains a key holdout. Schrader wouldn’t confirm that a CBO would get him to yes.

It remains unclear whether Nancy Pelosi has the votes to advance Democrats’ reconciliation package, as some of the centrist members of her caucus have voiced concerns about the proposal.

After meeting with the speaker, congressman Jared Golden said he would vote “no” on advancing the reconciliation package until the Congressional Budget Office analyzes the bill. He also wants the chamber to first vote on the bipartisan infrastructure bill.

Rep. Jared Golden, emerging from Pelosi’s office, says he’s a NO on Build Back Better without a CBO score.

“You should be asking if there will be a vote,” he says. Asked if this can get done today: “That’s the million dollar question.”

“You should be asking if there will be a vote,” Golden said, per Axios.

As a reminder, Pelosi can only afford to lose three votes and still pass the reconciliation package, because of Democrats’ narrow majority in the House.

This is Joan Greve in Washington, taking over for Joanna Walters.

Joe Biden will soon deliver remarks on the strong October jobs report, which showed that the US economy added 531,000 jobs last month.

The president and the first lady will then attend the funeral of former secretary of state Colin Powell at Washington National Cathedral.

The blog will be providing updates on all of those events, so stay tuned.

The blog will have a live stream of the service today at the national cathedral in Washington, DC, to commemorate the life of groundbreaker Colin Powell, who became the first Black secretary of state in the US.

Joe Biden and first lady Jill Biden will attend the service, which is due to begin at 12pm ET (4pm GMT). Powell served as secretary of state under president George W Bush and the general died of complications resulting from Covid-19, combined with cancer and Parkinson’s disease, last month.

Powell’s reputation was tarnished by the fact that he played a pivotal role in attempting to justify the 2003 invasion of Iraq, an action he later said he regretted.

He endorsed Barack Obama’s run before he became the first Black US president in 2008. Powell himself never ran for president, to the surprise of some.

Former secretary of state Madeleine Albright will give a eulogy.

Meanwhile, the US jobs figures for October have just come out and they are good for Biden. Read all about it in our business live blog, brought to you by the London team, here.

Good morning, US live blog readers, it’s another busy day in Washington, DC, as the House is already meeting and debating Joe Biden’s flagship bills – $1tn on infrastructure, $1.75tn on social benefits and action on the climate crisis – and is hoping to vote on both today in a crucial step forward. It’s also a big day at the national cathedral.

A man in North Carolina won big after he decided to use his fortune cookie numbers to play the lottery.Gabriel Fierro, 60, picked up the cookie while … END_OF_DOCUMENT_TOKEN_TO_BE_REPLACED

Dear J.T. & Dale: Is the interview prep any different when interviewing with someone who would work on the same level as you or below you, versus … END_OF_DOCUMENT_TOKEN_TO_BE_REPLACED