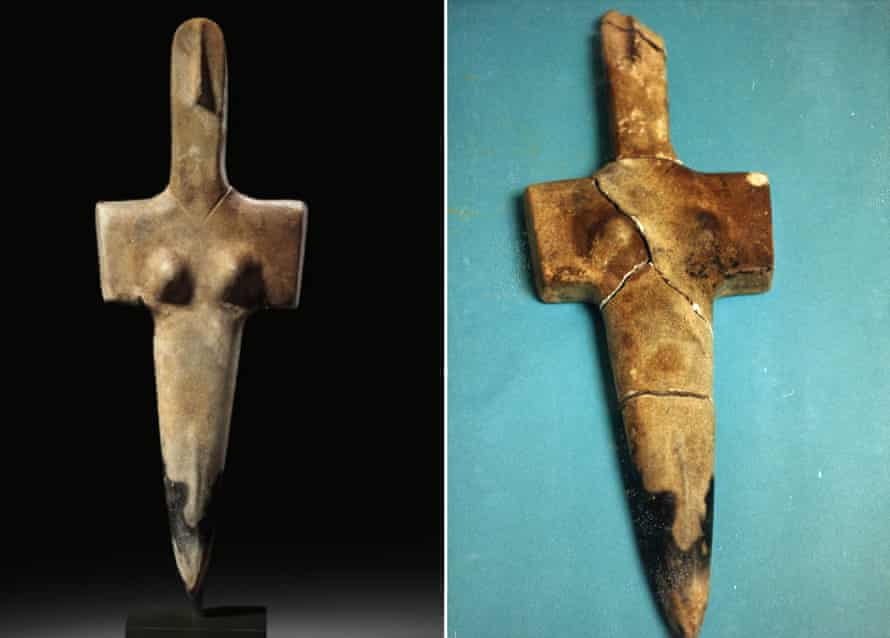 An American hedge-fund billionaire has surrendered 180 looted and illegally smuggled antiquities valued at $70m and been handed an unprecedented lifetime ban on acquiring other relics as part of an agreement with the Manhattan district attorney’s office.

The lifetime ban marks the dramatic culmination of an international investigation that began officially in 2017.

The DA’s office said its inquiry found “compelling evidence” that the antiquities were stolen from 11 countries, and that at least 171 passed through traffickers before being bought by Steinhardt.

Steinhardt, who had been chairman of the board of Wisdom Tree Investments before retiring in 2019, denied criminal wrongdoing in resolving the matter, which ended a grand jury investigation into him.

Vance said: “For decades, Michael Steinhardt displayed a rapacious appetite for plundered artefacts without concern for the legality of his actions, the legitimacy of the pieces he bought and sold or the grievous cultural damage he wrought across the globe.

“His pursuit of ‘new’ additions to showcase and sell knew no geographic or moral boundaries, as reflected in the sprawling underworld of antiquities traffickers, crime bosses, money launderers and tomb raiders he relied upon to expand his collection.”

Vance noted that the antiquities would be returned to their rightful owners rather than be held as evidence for the years necessary to complete a grand-jury indictment and trial.

“This resolution also enables my office to shield the identity of the many witnesses here and abroad whose names would be released at any trial, to protect the integrity of parallel investigations in each of the 11 countries with whom we are conducting joint investigations,” he said.

In March 1993, Steinhardt loaned The Stag’s Head Rhyton to the Metropolitan Museum of Art, where it remained until the DA’s office applied for and received a warrant to seize it. Photograph: Peter Horree/Alamy

Under the terms of the agreement, Steinhardt has surrendered The Stag’s Head Rhyton, a spectacular ceremonial vessel in the form of a stag’s head, which dates to 400BCE and appeared without provenance on the market following looting in Milas, Turkey. It is valued at $3.5m.

Other treasures include the Ercolano Fresco, which depicts an infant Hercules strangling a snake sent by Hera to slay him, which had been purchased from convicted antiquities traffickers for $650,000 in 1995, the year it had been looted from a Roman villa in the ruins of Herculaneum, near modern Naples. Today, it has been valued at $1m.

Over 15 years, Prof Christos Tsirogiannis, a leading archaeologist, has identified more than 1,550 looted artefacts within auction houses, commercial galleries, private collections and museums. A former senior field archaeologist at the University of Cambridge, he is now an associate professor at the institute of advanced studies at the University of Aarhus in Denmark, and helps to secure the repatriation of antiquities by alerting Interpol and other authorities.

He told the Guardian: “Many of the dozens of antiquities that I identified in the Steinhardt collection – using the photographic archives confiscated from convicted dealers and traffickers – appeared first in the ‘most reputable’ top dealers and auction houses in the world.

Left: a Sardinian idol fully restored at the Christie’s auction in December 2014 in New York. Right: the same idol, broken in pieces and missing part of its head, in the Medici archive. Composite: Christie’s/Medici Archive

“I first alerted the DA’s office in New York on the Steinhardt case in November 2014, when I identified an extremely rare prehistoric Sardinian idol, valued at $800,000-$1.2m, put on auction by Steinhardt at Christie’s in New York. I found an image of the same idol, broken in pieces, in the archive confiscated from the notorious and convicted antiquities dealer Giacomo Medici. The object was withdrawn and repatriated to Italy … This case led gradually to the raids on Steinhardt’s office and houses with the results we see today.”

In a statement, Steinhardt’s lawyers said: “Mr Steinhardt is pleased that the district attorney’s years-long investigation has concluded without any charges, and that items wrongfully taken by others will be returned to their native countries.”

Nairobi [Kenya], May 15 (ANI): Environmental methane emissions are fuelled by the natural burps and belches from livestock ruminants like cows, … END_OF_DOCUMENT_TOKEN_TO_BE_REPLACED