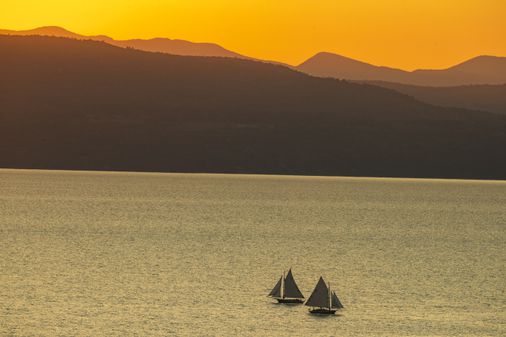 The list highlights Maine’s Moosehead Lake and the Lake Champlain Islands in Vermont as well as other aquatic beauties around the country, such as Lake Tahoe on the California-Nevada border and Crater Lake National Park in Oregon.

Both Moosehead Lake and Lake Champlain are a five- to six-hour drive from Boston, but if you’re in the market for a weekend getaway, you can be sure to enjoy their gorgeous views, tranquil surroundings, and and variety of activities.

Take a half-hour drive from Burlington to reach the majestic waters and sites of the Lake Champlain Islands in Vermont. A vertical archipelago, the islands of the 120-mile long Lake Champlain boast state parks, beaches, farms, and vineyards, giving you plenty of ways to enjoy the great outdoors. Head to the northern islet of Isle La Motte to feast your eyes on the world’s oldest coral reef, explore the wildlife refuges, or take the scenic route with the lake on either side of the 14-mile-long Island Line Trail meant for bikers or pedestrians. If you prefer to stay on four wheels, all the islands are connected via U.S. Route 2, which also stretches to the mainland.

About three hours from Portland in the Maine Highlands region, the sublime Moosehead Lake is aptly named. Not only do moose in the region outnumber humans three to one (according to Destination Moosehead Lake), but the lake is actually shaped like a moose’s head, antlers and all. Embark on a moose safari, go fishing, jet-ski the 40-mile long lake, and then unwind at one of the area’s storied inns or wilderness lodges. Maine’s largest lake has something for everyone.

Dana Gerber can be reached at dana.gerber@globe.com

No, consumers didn’t suddenly flock back to the mall. That was just a media joke. They bought online more than ever. Sales at department stores … END_OF_DOCUMENT_TOKEN_TO_BE_REPLACED