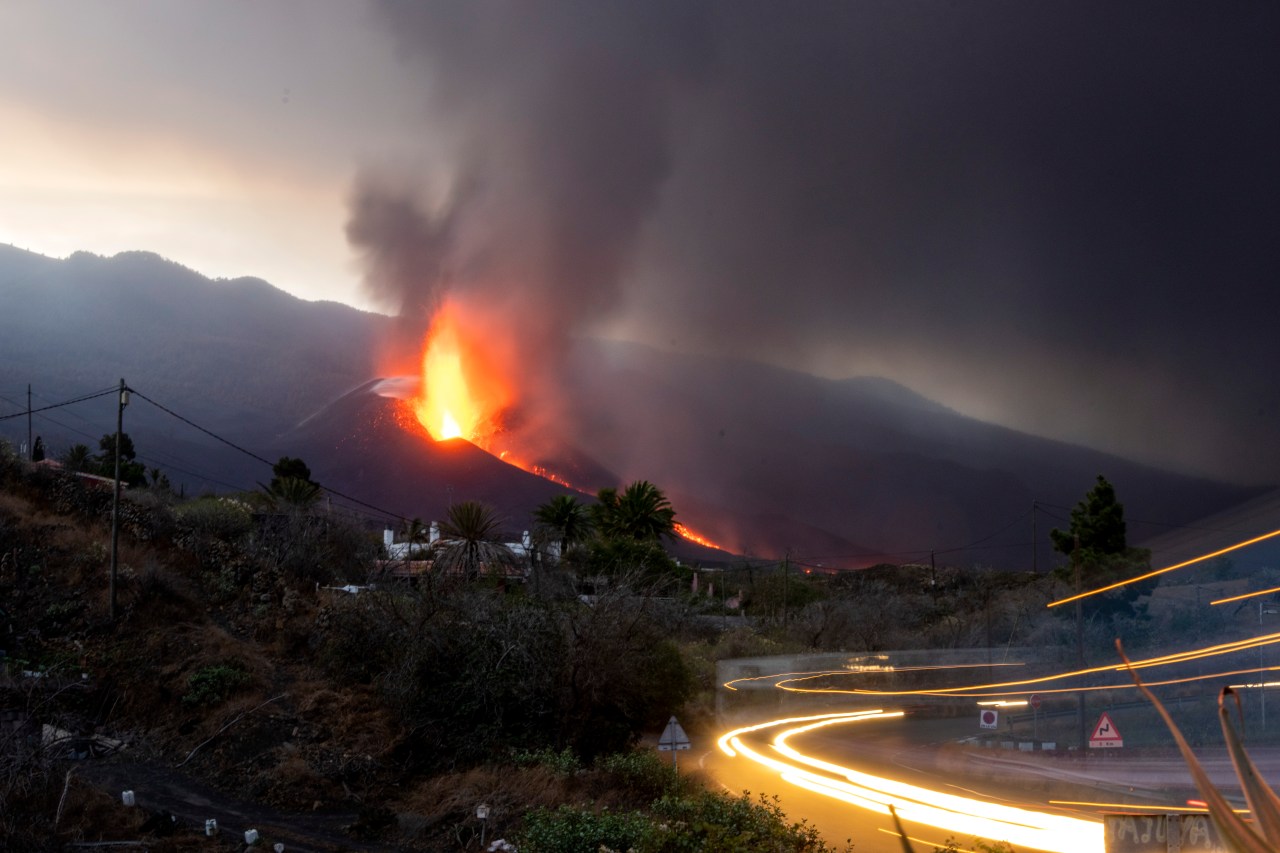 Lava flows from a volcano as it continues to erupt on the Canary island of La Palma, Spain, Wednesday, Oct. 27, 2021. Officials say a volcano erupting for the past five weeks on the Spanish island of La Palma is more active than ever. New lava flows have emerged following a partial collapse of the crater and threaten to engulf previously unaffected areas. (AP Photo/Emilio Morenatti)

LOS LLANOS DE ARIDANE, Canary Islands (AP) — Residents on Spain’s La Palma island braced Wednesday for the possibility of bigger earthquakes that could compound the damage from a volcano spilling lava more than five weeks since it erupted.

Seismologists said a 4.6 magnitude earthquake shook the island a day after they recorded a 4.9 magnitude quake that was the strongest so far of the hundreds that have occurred under La Palma since the volcano’s Sept. 19 eruption.

So far, the earthquakes have either been small enough or far enough under La Palma to do no harm, other than adding to the anxiety of the island residents. The Tuesday earthquake was felt up to 60 miles (96 kilometers) away on three other segments of the Canary Islands, an archipelago off northwest Africa.

“The scientific committee has been warning for more than a week that we could see earthquakes, given their recent depth of around 12 kilometers (7.4 miles) and their magnitude, that reach a magnitude of 6 (on the Richter scale),” María José Blanco, director of Spain’s National Geographic Institute on the Canary Islands, told Spanish national broadcaster RTVE.

Flows of molten rock from the Cumbre Vieja volcano itself have caused the evacuations of about 7,500 people and destroyed more than 2,000 buildings, mostly homes. The rivers of lava cover over 900 hectares (2,200 acres) of mostly farmland, while one major flow is extending the island into the Atlantic as it cools.

No deaths have resulted from the eruption. Other than in an area on the island’s western side, life continues as normal for La Palma’s 85,000 residents except for having to clean up volcanic ash.

“We saw the worst-case scenario in the 1949 eruption, when a second volcano mouth opened up and cut off the southern part of the island, which had to be supplied by boat,” volcano scientist Vicente Soler said. “That is highly improbable, although not impossible, today.”

A man in North Carolina won big after he decided to use his fortune cookie numbers to play the lottery.Gabriel Fierro, 60, picked up the cookie while … END_OF_DOCUMENT_TOKEN_TO_BE_REPLACED

Dear J.T. & Dale: Is the interview prep any different when interviewing with someone who would work on the same level as you or below you, versus … END_OF_DOCUMENT_TOKEN_TO_BE_REPLACED