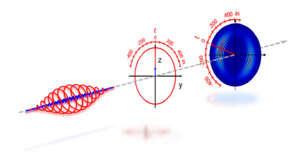 Timing photoionization is essential for our understanding of how light and matter interact on the most fundamental level. The advent of attosecond metrologies allows us to access the timing information on the natural scale of electrons in atoms and molecules. The attoclock is a powerful tool that can access such short time scale, in which a nearly circularly polarized laser field is used to map the tunneling time of an electron to the offset angle of the photoelectron momentum spectrum in the laser polarization plane. However, the accurate reconstruction of the ionization time from the offset angle presents a formidable theoretical task, which includes the treatment of the effect of Coulomb potential and multielectron correlation, etc. Thus, the experimental conclusion of the tunneling time problem depends on theoretical modeling of the Coulomb interaction. So far, the question of whether the tunneling time is finite or not is still under debate and in controversy.

In a new paper published in Light Science & Application, a team of scientists, led by Professor Min Li, Professor Yueming Zhou, and Professor Peixiang Lu from Wuhan National Laboratory for Optoelectronics and School of physics, Huazhong University of Science and Technology, China, has proposed and demonstrated a scheme to experimentally determine the tunneling time in an attoclock without any theoretical calculation. In this scheme, a perturbative second-harmonic field is added to the fundamental driving field. By analyzing the relative phase dependence of the photoelectron yield in the PMDs, the tunneling time are precisely measured.

The team applied the scheme to study the strong field tunneling ionization time of argon atom, and determined that the tunneling time is close to zero with a precision of a few attoseconds.

Using the present scheme, the team further retrieved the ionization time of electrons with different energies. They found that the extracted tunneling ionization time from the measurement at the most probable emission angle decreases with increasing electron energy, which contradicts with the prediction of the classical trajectory model. This remains an interesting topic for further investigation.

The scheme is self-referencing and independent on theoretical modeling of the Coulomb effect. Extending this method to molecules and even solids can provide us not only the fundamental dynamics of laser-matter interaction but also the potential of retrieval of geometrical information of the targets.

We were unable to send the article. A surgery center in Springdale sold for $2.6 million. Willow … END_OF_DOCUMENT_TOKEN_TO_BE_REPLACED

U.S. chip designer Qualcomm Inc on Thursday said its automotive business “pipeline” increased to $30 billion, up more than $10 billion since its third … END_OF_DOCUMENT_TOKEN_TO_BE_REPLACED