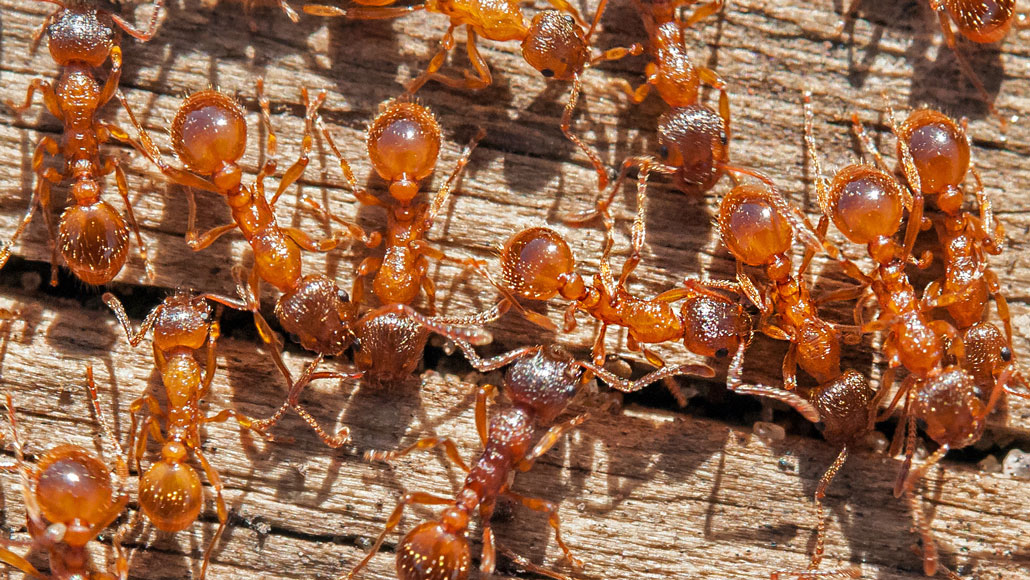 To make a spider flee, bring on the fire ants. Or rather, just their chemical signals.

Some spiders common in North American homes avoid building their webs in chambers that recently housed European fire ants, researchers report May 19 in Royal Society Open Science. The ants probably left behind chemical traces, the researchers say. That could signal danger to the arachnids because ants sometimes feast on spiders. The reaction hints that the insects might be a source of natural spider-repelling chemicals.

“A lot of people are afraid of spiders, and there’s nothing on the market that is reliable that keeps the spiders away,” says Andreas Fischer, an arachnologist at Simon Fraser University in Burnaby, Canada.

Fischer and his colleagues housed false black widow spiders (Steatoda grossa) in a glass container with three connected chambers. The arachnids were less likely to settle down in empty compartments that had once contained European fire ants (Myrmica rubra), an invasive species in North America. Other spider species — black widow (Latrodectus hesperus), cross (Araneus diadematus) and hobo (Eratigena agrestis) — also had an aversion to the former fire ant chambers.

The finding is exciting but not ready for real-world use, Fischer says. “I really hope that people don’t go out there and get European fire ants into their garden to get rid of spiders.” The ants are aggressive, “horrendous pests” with stinging bites and are tough to get rid of. Another type of fire ant (Solenopsis invicta) native to South America is among the costliest invasive species in the world (SN: 3/31/21).

The team plans to pinpoint what chemical spooks the spiders and figure out if it can be made in the lab. Then the researchers will make sure the potential spider repellent is not toxic or a homing beacon for ants.

“That’s the last thing we want, that we get rid of spiders but attract ants,” Fischer says.