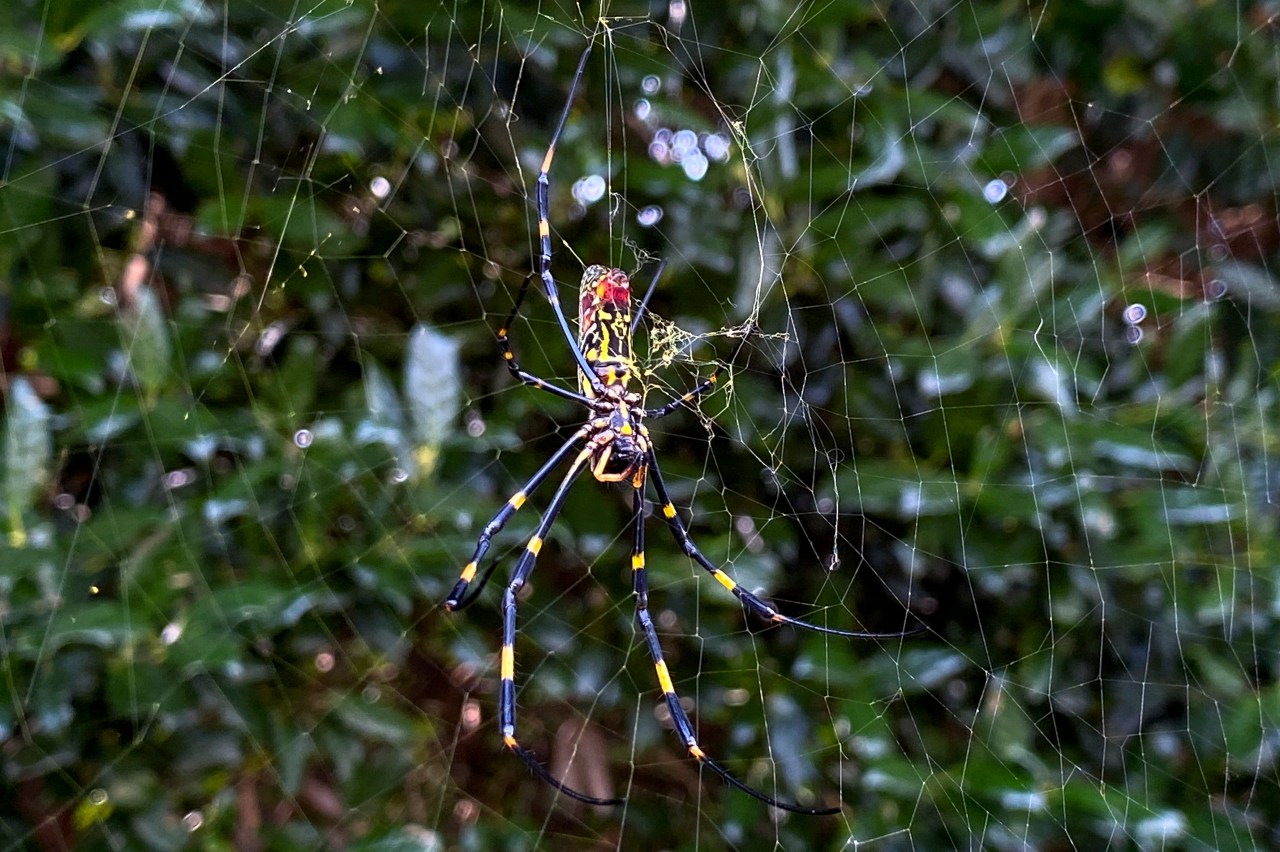 ATLANTA (AP) — A large spider native to East Asia has spun its thick, golden web on power lines, porches and vegetable patches all over north Georgia this year — a proliferation that has driven some unnerved homeowners indoors and prompted a flood of anxious social media posts.

In metro Atlanta, Jennifer Turpin — a self-described arachnophobe — stopped blowing leaves in her yard after inadvertently walking into a web created by the Joro spider. Stephen Carter has avoided a walking trail along the Chattahoochee River where he encountered Joro webs every dozen steps.

Farther east in Winterville, Georgia, Will Hudson’s front porch became unusable amid an abundance of Joro webs 10 feet (3 meters) deep. Hudson estimates he’s killed more than 300 of the spiders on his property.

“The webs are a real mess,” said Hudson, an entomologist at the University of Georgia. “Nobody wants to come out of the door in the morning, walk down the steps and get a face full of spider web.”

The Joro — Trichonephila clavata — is part of a group of spiders known as orb weavers for their highly organized, wheel-shaped webs. Common in Japan, China, Korea and Taiwan, Joro females have colorful yellow, blue and red markings on their bodies. They can measure three inches (8 cm) across when their legs are fully extended.

It’s not clear exactly how and when the first Joro spider arrived in the U.S. In Georgia, a researcher identified one about 80 miles (128 km) northeast of Atlanta in 2014. They have also been found in South Carolina, and Hudson is convinced they will spread across the South.

It’s also not clear why they are so abundant this year, though experts agree their numbers have exploded.

“We see natural ebbs and flows in the populations of many different species that may be linked to local conditions, particularly slight changes in rainfall,” said Paula Cushing, an arachnologist at the Denver Museum of Nature & Science.

Cushing and other experts say Joros are not a threat to humans or dogs and cats and won’t bite them unless they are feeling very threatened. Hudson said a researcher collecting them with her bare hands reported the occasional pinch, but said the spiders never broke her skin.

Researchers, however, don’t agree fully on what impact, if any, the spider will have on other species and the environment.

Debbie Gilbert, 67, isn’t waiting to find out. She has adopted a zero-tolerance policy for the spiders around her home in Norcross, Georgia, winding their webs with a stick, bringing them down and stomping them.

“I don’t advocate killing anything. I live in peace with all the spiders around here and everything else,” she said. “But (Joros) just don’t belong here, that’s all.”

Turpin, 50, tried to set a Joro spider web on fire at her East Cobb home, but then got scared it would fall on her and fell into a hole as she quickly backpedaled. She had a neighbor remove it instead.

“I just don’t think I’m going to do yard work anymore,” she said.

Nancy Hinkle, another entomologist at the University of Georgia, said Joros help suppress mosquitoes and biting flies and are one of the few spiders that will catch and eat brown marmorated stink bugs, which are serious pests to many crops.

“This is wonderful. This is exciting. Spiders are our friends,” she said. “They are out there catching all the pests we don’t want around our home.”

Ann Rypstra, who studies spider behavior at Miami University, was more cautious in her assessment of the Jora’s potential impacts, saying more research was needed.

“I’d always err on the side of caution when you have something that establishes itself where it’s not supposed to be,” she said.

Researchers at South Carolina’s Clemson University also were more circumspect, saying in a factsheet published online in August that they “do not yet know if there will be any negative impacts from this non-native species on the local ecology of South Carolina.”

Amateur gardeners and naturalists have raised concerns about the safety of native spiders and bees and other pollinators.

Cushing said Joros are probably big enough to take on large pollinators caught in their webs, but those insects may be an insignificant part of their diet. Rypstra has studied a similar spider species and said their webs are used by other spiders as a source of food, so the Joro might help native spiders. But she said there was also evidence Joros compete with other orb weavers.

The bottom line: there are many unknowns.

Most of the Joros are expected to die by late November, but they may return in equally large, or even larger, numbers next year, though scientists say even that is hard to predict with any certainty.

Anthony Trendl, a homeowner in Suwanee, Georgia, is enjoying them for now. He has started a website, jorospider.com, to share his enthusiasm about the spiders and foster understanding of them. While they raise concerns and can be creepy, they are also beautiful, he said.

“It’s been a rough go of things,” he said. “I wanted to find some good in this world. To me, nature’s an easy place to find it.”