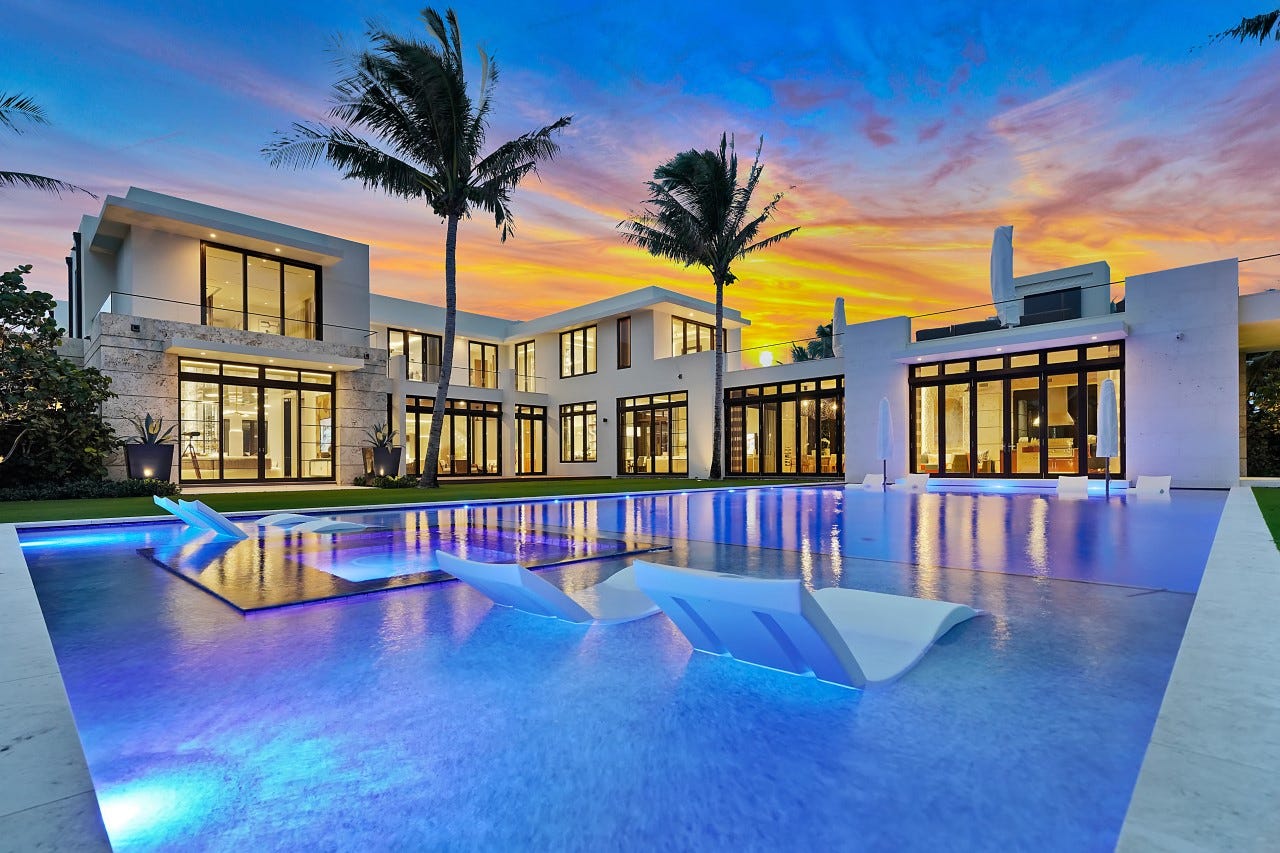 The ultra-rich community of Palm Beach, Florida, saw prices hit an all-time high in the second quarter as the number of mansions for sale fell to a record low.

Palm Beach saw its median price for a single-family home hit a whopping $11.7 million at the end of the quarter. That’s up 38% from one year ago and a record high for the area, according to real estate brokers from Douglas Elliman and Miller Samuel.

The skyrocketing prices in a market that’s already known to be super expensive are being driven by an influx of wealthy private equity chiefs, hedge fund managers and other finance executives moving into the area from places such as New York and other financial centers, CNBC reported. That’s pushing up demand, and there simply aren’t enough luxury homes to go around.

Real estate prices in Palm Beach are now almost as expensive as in Manhattan, Miller said. The price per square foot there topped $1,500 in the second quarter, inching close to the $1,545 price in Manhattan.

But the sky-high prices aren’t deterring buyers, who keep paying up, he said. Data from Samuel Miller shows that sales of single-family homes in Palm Beach were up 90% in the quarter compared to the same period one year ago, when the area was already seeing increased activity from the first human migrations at the outset of the COVID-19 pademic.

Palm Beach is now suffering from an acute shortage of mansions for sale. Samuel told CNBC there’s barely a one-month supply of homes for sale in the glitzy town, a record low. There were just 25 homes for sale at the end of the quarter, but the real number is likely lower than that as some are probably under, or already heading to contract, he said.

To deal with the shortage and find homes at the behest of their clients, some brokers have taken to going door to door, asking people if they’d be willing to consider a sale.

That’s the main tactic of Christopher Levitt, one of Douglas Elliman’s top brokers in Palm Beach. He told CNBC that simply going around and asking isn’t enough because although the high price might be tempting, anyone who sells will still need to find another house. So Levitt explained that his job now entails helping sellers find another, smaller home to buy, and then also helping the smaller homeowner find a new place as well.

It’s unlikely to be a short-term trend either, Levitt said of the hot Palm Beach market. He believes the pandemic and the remote work trend will result in the permanent migration of numerous wealthy finance chiefs from New York and other traditional financial centers. It’s notable there has already been increaseed development of large-scale office towers and amenities in West Palm Beach, for example.

“This is the tip of the iceberg,” Levitt insisted.

Some examples of wealthy finance chiefs who already appear to have relocated to Palm Beach permanently include the hedge fund billionaire David Tepper, who in February doled out $68 million to buy a mansion in the area. That same month, Scott Shleifer, a partner at Tiger Global Management, paid a record-breaking $122.7 million to buy an oceanfront spec house (pictured) in Palm Beach that was once owned by former President Donald Trump.

They’re both now neighbors of Igor Tulchinsy, the founder, chairman and CEO of quantitative asset management firm WorldQuant, who recently purchased his own $39.5 million home in North Palm Beach.

Some developers are looking to cash in on the trend too. Todd Michael Glaser has reportedly just acquired a private island off of Palm Beach for $85 million. He said he and his partners intend to renovate the existing property on the island and sell it on for profit.

No, consumers didn’t suddenly flock back to the mall. That was just a media joke. They bought online more than ever. Sales at department stores … END_OF_DOCUMENT_TOKEN_TO_BE_REPLACED