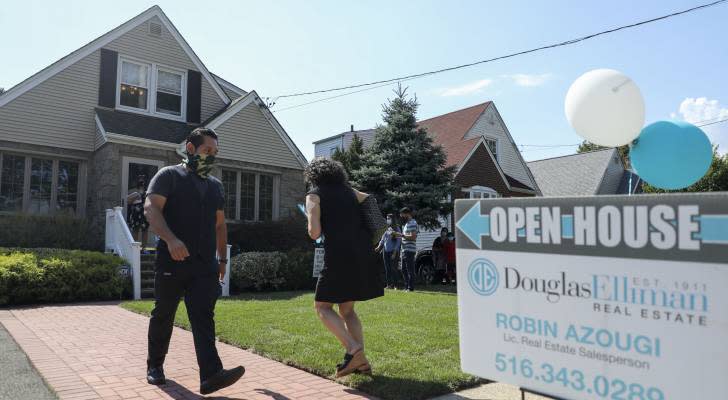 To win in this year’s hot US real estate market, buyers skip inspections and pay over asking

If you’ve shopped for a house recently, you’ve likely become familiar with the new rules of real estate: You’re going to compete against multiple bidders, you’re going to pay over asking price, and you’re probably not going to find the home of your dreams.

The spring homebuying season is in full force, and weary buyers hoping to catch a break in the ultracompetitive market are seeing little change.

But after years of cheap borrowing costs that made homeownership attainable for many more Americans, contributing to a historically low supply of properties for sale that sent prices soaring, the U.S. housing market is facing new headwinds.

The fundamentals that have been fueling the real estate frenzy are shifting — and buyers and sellers are questioning how to navigate the market. Here’s an overview of where things may shake out on several fronts in the coming months.

After hitting a record low of 2.65% in January 2021, mortgage rates are climbing at their fastest pace in decades. The average 30-year fixed-rate mortgage has surged above 5%, and homebuyers now need to earn about $25,000 more a year to be able to afford the typical home, compared to where rates were last year.

Borrowing costs have risen sharply as the Federal Reserve has started raising its benchmark interest rate and implementing other new policies meant to slow the economy and curb rapid inflation.

Consumers expect rates on 30-year fixed-rate mortgages to average 6.7% next spring and soar to above 8% over the next three years, according to a survey from the Federal Reserve Bank of New York.

If rates do, in fact, go that high, they shouldn’t stay there for long, says Ralph McLaughlin, chief economist with Kukun, a real estate data and analytics firm.

“If mortgage rates get to the 7, 8, 9 percent range, I wouldn’t anticipate that to persist very long simply because the Fed would likely take action,” McLaughlin says. “It means there’s something else going on in the economy.”

He expects rates to settle no higher than around 6% over the next six months to a year as the mortgage market has already priced in the Fed’s planned interest rate hikes.

Housing has never been so expensive. Yet prices are expected to cool down gradually beginning late this spring, real estate firm Zillow says in its latest forecast.

The company expects home prices to grow about 15% over the next 12 months, down from its forecast of 16.5% last month.

The downward revision, Zillow says, reflects affordability headwinds that “have strengthened faster than expected, largely due to sharp increases in mortgage rates.”

Lilly Rockwell, a real estate agent with Compass in Austin, Texas, isn’t so sure that higher mortgage rates will slow the market — at least among the buyers she’s working with.

“Every client I have right now has come to me at some point this spring and said, ‘Do you think rising interest rates will affect demand?’ When I probe them on why they’re asking, they all say, ‘We’re hoping demand will slow down,’ which tells me they all can handle the higher interest rates,” she says.

Rockwell recently had a client who bid $75,000 — or about 10% — over asking price on a three-bedroom house built in the 1940s near downtown Austin.

It took a full day for the listing agent to even acknowledge the bid, and Rockwell didn’t find out that her clients lost the house until the status on the listing changed to “under contract.”

“To me, that was a reflection of how unimportant our offer was to that listing agent,” she says.

The supply of homes for sale in America is discouragingly low. Inventory is down 63% from where it was before the pandemic.

Recent home buyer Tina Burjaliani was shocked at how tight the market was when she started shopping for a house after moving to the Washington, D.C., area last summer.

Burjaliani, who relocated to the U.S. from Europe for her job with an international organization, had bought homes before, but everything she had learned from those experiences was irrelevant.

After being outbid on three properties, Burjaliani was finally able to secure a three-bedroom home on leafy street in a D.C. suburb by offering about 25% above asking price and skipping the inspection.

“Even though last month the interest rate increased,” she says, “based on my experience the competition was still very big.”

One metric, however, shows competition already easing. A report from the Redfin real estate firm shows that homebuyer competition has fallen as a result of higher mortgage rates and shoppers backing out of the market.

The company said 65% of home offers written by its agents faced competition in March, down from 67% in February. That’s the first month-over-month decline since September.

Strategies if you’re planning to buy a home

Buyers are finding that in order to win a home in a bidding war, they must present an offer that makes the seller happy.

“In my initial consultation with buyers I’m very straight and honest,” Rockwell says. “I talk about how you will need to waive almost every contingency you can.”

That often means forgoing an appraisal contingency, and if an appraisal comes in lower than the contract price, the buyer is typically stuck paying the difference.

Buyers may also consider offering free or low rent to sellers who may themselves be shopping for a house and might not be ready to move when their home sells.

When it comes to borrowing costs, analysts say buyers worried about rising 30-year mortgage rates should consider an adjustable-rate mortgage — or ARM — which starts out with lower rates than longer-term loans.

Those who are willing to wait for more inventory to come onto the market will have a better chance of getting the home they want, he says. And those buyers are likely to stay in their homes longer and reap more benefits of homeownership — even if they have to pay a higher mortgage rate.

Hope for the long-term housing market

In the coming years, throngs of baby boomers will start selling the homes they’ve lived in for decades. Many will likely move into retirement communities, opening up opportunities for younger households to buy their homes.

Builders will also contribute to supply. Though they’ve been hampered by labor shortages and supply constraints, they’ll eventually catch up, McLaughlin says.

“Most buyers of brand new homes are owners of existing ones,” he says. “So as homebuilders deliver new homes and those buyers move in, typically they’ll sell their own home. That will help free up another house.”

High prices could also lead to more supply. Even if a homeowner took out a mortgage with one of the historically low interest rates of the past several years, the opportunity to cash out can be enticing.

“Everyone’s got a number,” McLaughlin says. “Not everyone’s going to hit it at the same time, but the more prices go up, the more those numbers are hit.”

This article provides information only and should not be construed as advice. It is provided without warranty of any kind.

We were unable to send the article. A surgery center in Springdale sold for $2.6 million. Willow … END_OF_DOCUMENT_TOKEN_TO_BE_REPLACED

U.S. chip designer Qualcomm Inc on Thursday said its automotive business “pipeline” increased to $30 billion, up more than $10 billion since its third … END_OF_DOCUMENT_TOKEN_TO_BE_REPLACED