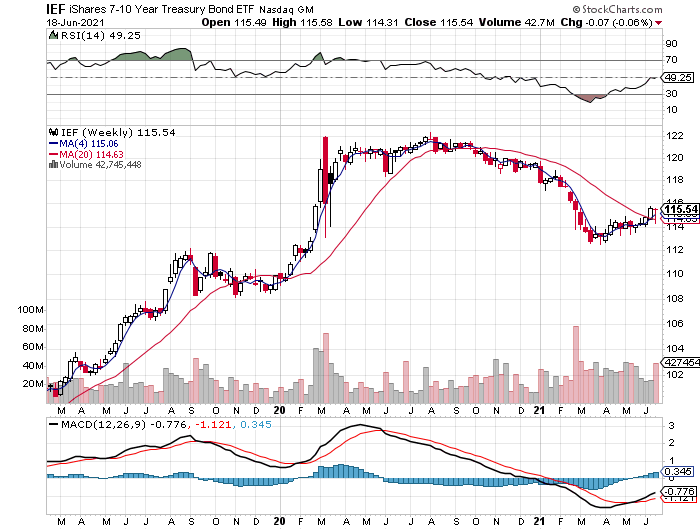 A tough week for markets

Blame it on the Federal Reserve. After Wednesday’s policy , which to the possibility that interest rate hikes may be nearer than previously thought, almost everything lost ground by the end of this week’s trading (through June 18). For details on all the strategy rules and risk metrics, see this summary.

The glaring exception for our 16-fund opportunity set: US investment-grade credits. In fact, the iShares iBoxx $ Investment Grade Corporate Bond ETF (NYSE:) extended a rally that began in mid-May.

One narrative making the rounds: investment-grade corporate have become more attractive as the market looks through the recent inflation surge, reasoning that it’s transitory. If so, the higher yields on corporates over comparable Treasuries are compelling after all.

There’s certainly a spread in favor of LQD over its Treasury equivalent—iShares 7-10 Year Treasury Bond ETF (NASDAQ:) for the trailing 12-month period, according to Morningstar.com: 2.58% vs. 0.89%.

Despite a substantially lower yield, IEF held up rather well last week, posting the second-best (albeit slightly negative) weekly performance.

The rush into bonds last week was a bit odd when you consider that the widespread selling of risk assets was triggered by fears that the Fed may start tightening monetary policy ahead of recent timeline expectations.

By some accounts, that’s a sign to steer clear of bonds. But tighter policy can take a toll on economic growth, at least on the margins. In the worst case scenario, higher rates tip the economy into recession.

That’s not a threat for the foreseeable future, but the underlying concept may be enough to juice demand for bonds, at least for now. All the more so if the crowd thinks that rate hikes will be modest (and still far off) while stays tame (despite recent evidence to the contrary).

Whatever your preferred forecast, the trend for Treasury yields remained decisively down. The rate on the fell for a fourth straight week to 1.45%. The long bond tumbled even more: the yield dropped to 2.01%, a four-month low. 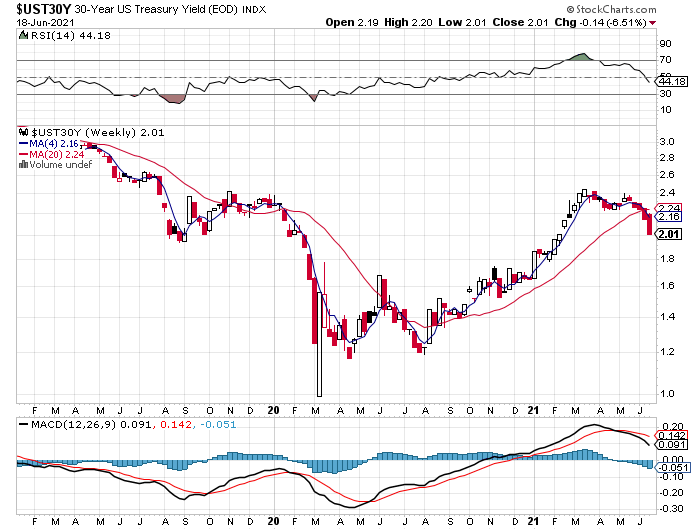 Bonds may be in favor again, but stocks, REITs and commodities are suddenly finding it tough to catch a bid. The red ink on these fronts was all-encompassing for our opportunity set. US stocks overall fell 1.9% on the week via Vanguard Total Stock Market Index Fund ETF Shares (NYSE:), the fund’s first weekly loss after three straight gains. 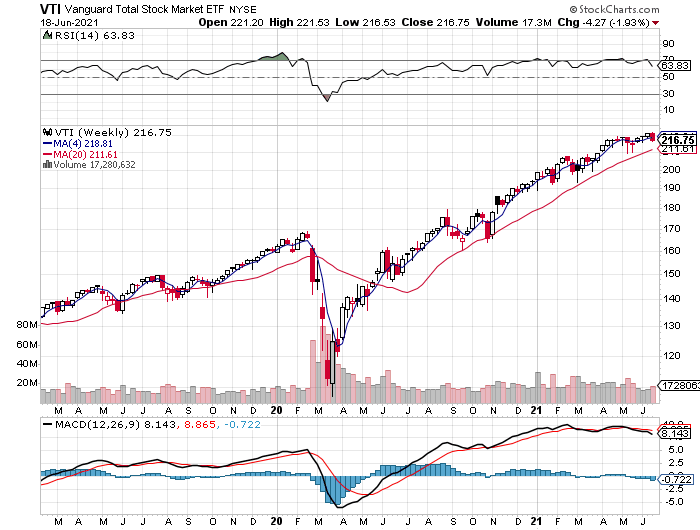 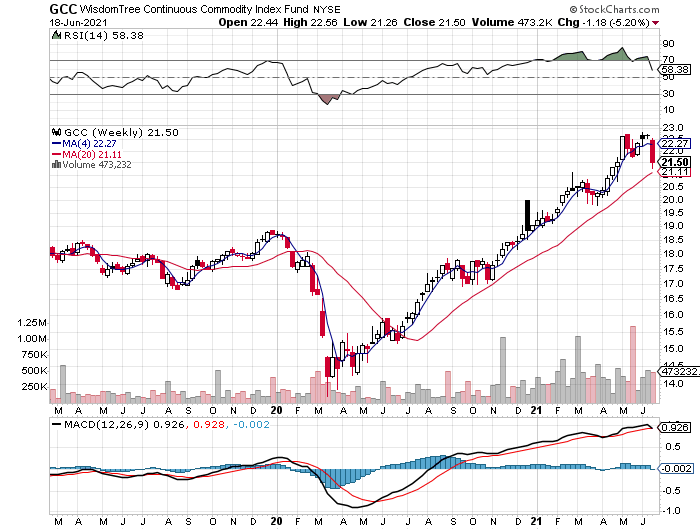 The big question is whether the sudden return of risk-off is the start of regime shift? That’s going to take some time to answer, but our initial guesstimate, no—this isn’t the start of an extended correction. But choppy markets probably lie ahead and the easy, virtually non-stop gains of late may be history.

The one forecast we’re most comfortable with: earning a risk premium is going to be a lot tougher in the second half of the year vs. the first six months.

Foreign assets suffered more than US markets, which weighed heavily on our main benchmark: Global Beta 16 (G.B16). This passive strategy (other than year-end rebalancing) tumbled 2.2% last week (see table below for the asset allocation).

All the strategy benchmarks remained comfortably in positive terrain for year-to-date results. G.B16 was still in the lead with a 7.9% gain so far in 2021. But after the week’s sudden reversal of fortunes, it’s getting harder to assume that unmanaged beta risk will enjoy smooth sailing.

The first order of business for the week ahead and beyond: deciding how to interpret monetary policy risk through a markets lens. A clearer outlook requires more economic data to sort out the implications. Meanwhile, the crowd’s on high alert for new signs of trouble.

“The fear held by some investors is that if the Fed tightens policy sooner than expected to help cool inflationary pressures, this could weigh on future economic growth,” advises Keith Lerner, chief market strategist at Truist Advisory Services, in a note to clients.

SHAWNEE TOWNSHIP — Bob and Connie Sutherland have been in the swimming pool business for 53 years, and it all started from an ad in the … END_OF_DOCUMENT_TOKEN_TO_BE_REPLACED

Washington [US], May 21 (ANI): According to a new Cornell research, Cnidocytes, also known as stinging cells are characteristics of Corals and … END_OF_DOCUMENT_TOKEN_TO_BE_REPLACED