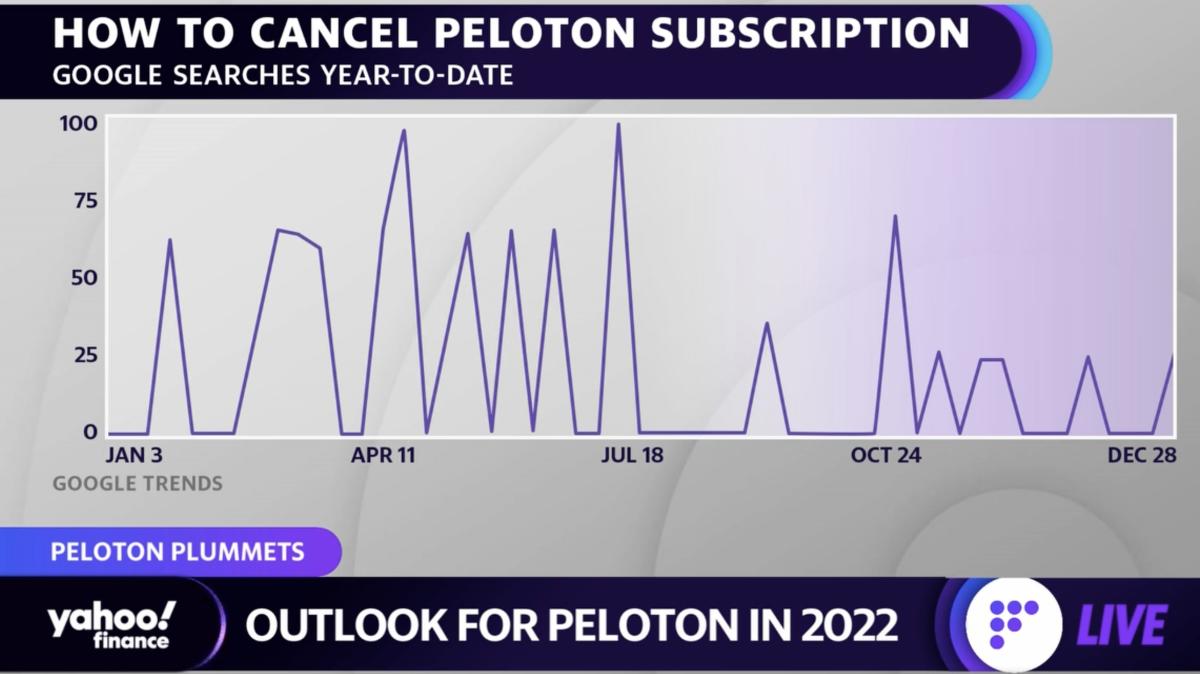 JULIE HYMAN: We have been looking at some of the highs and lows thus far of 2021, crunching the numbers on the best and worst performers. And within the NASDAQ 100, there is one stock that stands out as the worst performer of the year. That stock is Peloton. We have seen it go through some trials this year, including a recall of its Tread product and, more recently, the situation with the “Sex and the City” spin-off or sequel, I guess you could call it.

Our next guest, though, says it’s time for the stock to recover. That’s Paul Golding, Macquarie Group Senior US Lifestyle and Payments Analyst. Paul, thanks for being here. What do you think is going to turn around here for Peloton? ‘Cause indeed, it has had a rough go of it this year.

PAUL GOLDING: Well, it’s great to be with you. We look at Peloton as a story of what they’ve built at this point. This is a globally recognized luxury brand with a vast manufacturing and shipping and logistics framework, and we think that the market is discounting that.

Shares have been under pressure. They’re trading at about, you know, two times EV to sales on FY23 by our estimates. And we have an $85 target price, which is about 4.7 times. And we think that’s more indicative of a subscription business, as well as a hardware business, as opposed to two times EV to sales multiple on 23, which is maybe more for just a strictly hardware business. And so, when you look at a subscription business like Peloton’s, with its member base and its subscription contribution margin, we just think that, at these levels, it’s undervalued.

BRIAN SOZZI: Yeah, the decline poll has been really striking, and the operational miscues at Peloton, I mean, they’ve been well documented. Do you think it would be better off if Peloton is under a larger company, a larger company that can help get through this next series of growth that it’s likely headed down?

And so, when you think about their ability to scale in their current form, they have taken action to scale. And that, over time, in our view, should facilitate their ability to produce incremental SKUs, incremental product verticals, so the bike vertical that they have right now, the Tread vertical that they relaunched with getting the Consumer Protection Bureau on board to allow them to sell the Tread again, and with future SKUs, whether it’s the Guide that they’ve already announced for early 2022 or SKUs that they haven’t announced yet.

JULIE HYMAN: So, you know, Sozzi just asked if maybe there could be a different owner. I would ask if there should be different management. I’m curious what your opinion of the management is. I think there were a lot of questions about management after the sort of brush-off of the initial concerns about the Tread. There were also questions about the media appearance of the Peloton in that “Sex and the City” show and why the company didn’t know about it, et cetera. Do you have confidence in the management here?

PAUL GOLDING: Well, I think for the market’s purposes and the step down in the November call for the result, the guidance and the internal forecast was the main trigger there on that downward pressure in terms of bringing in expectations for this fiscal year versus prior expectations. And I think that’s just a matter of getting the process refined.

We’ve talked in our research about how we’re still cautious about the Guide as it finds its footing and this process finds its footing. But we’ve also said that they’ve come out of a very volatile time. This is COVID with acute demand for their product, and that pretty much started within one or two quarters of their public launch, their IPO.

And so, when you think about a good baseline for management to work off of in terms of forecasting, they’ve had a pretty unique time to go through that doesn’t necessarily help in forecasting consistently. And so I think it’s just a matter of more time, more refining, and more consistent demand and supply trends going forward.

BRIAN SOZZI: And Paul, there’s been a– there’s been a lot of new competitors into this marketplace over the past year, whether it’s in the bike category, treadmill category, everything seems to be connected. How concerned are you about those new entrants?

PAUL GOLDING: Well, this goes back to our comment on scale. Peloton’s brand, its lifestyle and wellness affinity among the consumer base, and its scale now in terms of manufacturing and shipping and delivery to deliver these products, I think all of that, as well as its media, right– it’s streaming this content, and it has a vast archive– all of that scale goes to, in our view, its ability to compete in this marketplace despite new entrants, despite competition.

And even its instructors, they’re, in a sense, a new celebrity class. And so all of these things, in our view, reinforce Peloton as a brand or as a platform that is aspirational for customers looking to get involved in this space and the streaming fitness space.

JULIE HYMAN: Well, we’ll see if they can turn it around going into 2022 for Peloton. Paul, thanks for being here. Happy New Year to you. Paul Golding is Macquarie Group’s Senior US Lifestyle and Payments Analyst.

A man in North Carolina won big after he decided to use his fortune cookie numbers to play the lottery.Gabriel Fierro, 60, picked up the cookie while … END_OF_DOCUMENT_TOKEN_TO_BE_REPLACED

Dear J.T. & Dale: Is the interview prep any different when interviewing with someone who would work on the same level as you or below you, versus … END_OF_DOCUMENT_TOKEN_TO_BE_REPLACED