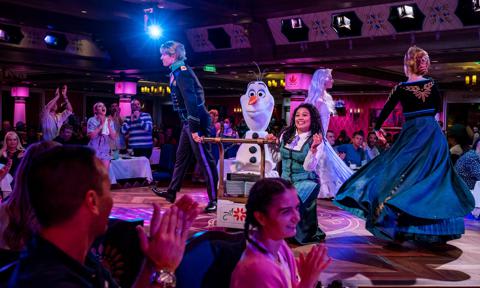 The Disney Wish is what vacation dreams are made of. The fifth ship in the Disney Cruise Line fleet is setting sail this summer…and you do not need to be a kid, or need to have one in order to enjoy the magic of this enchanting ship.

“It is a family cruise, but we cater to everybody﻿,” Jaco Gouws, senior manager of port adventures and recreation for Disney Cruise Line, told HOLA! USA during the Disney Wish’s christening cruise. “The service that we have is unmatched in [the] industry and our experiences that we have, whether you’re a little kid or a big kid at heart, you’re still gonna come and enjoy it and have fun.”

“We have a lot to do for adults. We specifically catered it so that after nine o’clock in the evenings, some of our venues are adult-only areas, but then also during the day there’s adult-only areas where kids don’t go, so you really will have a good time. But the other thing is we have these amazing kids clubs, so that’s where the kids spend a majority of their time,” Jaco added. “So adults do get to enjoy our service and quality on the ship without being surrounded with kids all the time if they don’t have them, or traveling with them.”

From incredible dining experiences and entertainment to Disney’s first-ever attraction at sea, here are highlights that you can look forward to as you sail happily ever after on board the Disney Wish…

Prepare to step into the kingdom of Arendelle and partake in an Avengers mission at two new family restaurants! “No one does rotational dining and entertainment like Disney, and we have two incredible ones on this ship. The first is Arendelle: A Frozen Dinner Adventure that has all of your favorite characters from Frozen, including Olaf. We also have Worlds of Marvel, which is a first of its kind truly cinematic dining experience where you’re engaging in awesome adventures with your favorite Avengers,” Daniel Soto, vice president of technology and digital for Disney Cruise Line, told HOLA! USA.

In addition to Worlds of Marvel, where diners play a role in an Avengers mission and dine on dishes inspired by the Marvel Cinematic Universe, and Disney’s first Frozen-themed theatrical dining experience: Arendelle: A Frozen Dining Adventure, the Disney Wish is also home to 1923, another family restaurant that celebrates the legacy of the Walt Disney Company.

The Disney Wish takes fun in the sun to a new splashtacular level with Disney’s first-ever attraction at sea: the AquaMouse. Riders will recognize familiar faces as animated shorts play on screens during the water ride.

We were unable to send the article. A surgery center in Springdale sold for $2.6 million. Willow … END_OF_DOCUMENT_TOKEN_TO_BE_REPLACED

U.S. chip designer Qualcomm Inc on Thursday said its automotive business “pipeline” increased to $30 billion, up more than $10 billion since its third … END_OF_DOCUMENT_TOKEN_TO_BE_REPLACED