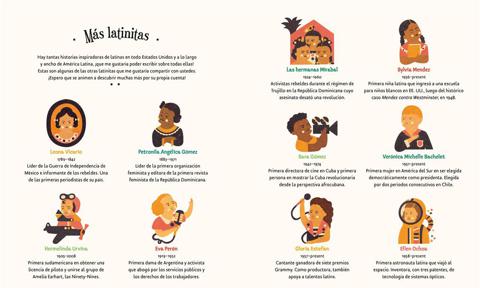 On March 1st Guatemalan-American author and illustrator Juliet Menéndez published the Spanish-language edition of “Latinitas,” a book that, although it is targeted at young readers, its art will make it a favorite of readers of all ages.

Menéndez, a former New York City art teacher, created the art after looking around her elementary school and realizing that the faces on the posters in the hall were exclusively white or male historical figures.

Knowing that her diverse population of students, particularly the young girls, deserved to see their history reflected on them, she created a compilation of biographies and portraits of 40 modern and historical Latinas from Central and South America and the Caribbean.

The writer depicts these women as children in the book, so young readers can see themselves and feel that these accomplishments are achievable.

In “Latinitas,” kids and adults will be able to read the stories of pop stars like Selena and Celia Cruz and other influential figures, such as Supreme Court Justice Sonia Sotomayor or Sor Juana Inés de la Cruz.

HOLA! USA had the opportunity to talk to Juliet Menéndez and discover more about her fantastic book.

The idea started as a poster project back in 2014. I was working as an art teacher in Upper Manhattan with students whose families came from the Dominican Republic, Mexico, and Puerto Rico, but when I would walk through the halls of their schools, I would see posters on the walls of people like Benjamin Franklin, Albert Einstein, and Dalí. I wondered: What if there were some fresh new faces on these walls–people that looked more like my students, who shared their backgrounds, heritage, and experiences?

That question led me to start researching Latinx history, and while there were many great stories I was finding, I noticed that something very important was missing: women! When I would come across them, they were often in the footnotes or the margins. And if there was anything that was going to bring out the feminist in me, that was it. So, I decided to dedicate this project to celebrating Latinas, showing that they were central to our history and were never just on the sidelines observing it. They have been shaping history throughout.

Can you provide more insight into the creative process behind the book?

From the beginning, it was very important to me to show three things. I wanted to show the long history of Latina feminists, Latinas from many different backgrounds, ethnicities, and professions, and how each Latina who achieved great things started as a child, playing games, experimenting, and making mistakes as they took their first small steps on their path to who they would later become.

I thought about my readers during my entire process. I wanted readers to be able to pick up my book and find a Latina who shared some aspect of their identity, their culture, and their dreams. I wanted them to read this book, see these inspiring stories and achievements, and think, “I can do this!”

Tell us more about the illustrations in LATINITAS

Each illustration was drawn and hand-painted in watercolor. The color palette was inspired by the painted signs, advertisements, menus, and sun-bathed street murals in Guatemala to give it the warmth, textures, and feeling of Latin America. And, because this project started as a poster project, I wanted each illustration to be symbolic and iconic. I thought a lot about the objects each Latinita is holding and tried to be thoughtful about finding things that spoke to both their childhood interests and their later achievements and legacy.

Did you team up with historians to get factual biographies of the women mentioned?

For some of the already well-known Latinitas, like Rita Moreno or Sonia Sotomayor, there was already a lot of information available in addition to their autobiographies. For the lesser-known women, finding information was a bit like a treasure hunt where I had to scour archived articles, contact academics who were researching them, and find ways to get access to books that were either out of print or not in wide circulation. For Gumercinda Páez from Panama, for example, I couldn’t find more than a few lines about her at first.

All I knew was that she had been a playwright and a congresswoman, and I was so inspired and determined to find out her story. I found a picture of a current congresswoman, Balbina Herrera, holding up a book that included information about Páez and reached out to her, hoping that maybe she could help me get a hold of the book. She didn’t know where to buy a copy, so she generously took pictures of the pertinent pages and sent them to me through WhatsApp. And I got in touch with another woman, Dania Batista, who had written her entire thesis on Páez. She also was incredibly generous and sent me everything she had! I couldn’t believe it! I am so incredibly grateful to both of them and the many other women who saved documents, articles, and photos and helped piece these stories together.

Will LATINITAS become a series with several volumes?

There are so many more incredibly inspiring Latinas whose stories I would love to share, so I am definitely open to adding to this collection! That being said, nothing official is in the works yet. Currently, I am illustrating books by April Pulley Sayre and Margarita Engle and have been working on creating my first picture book!

A man in North Carolina won big after he decided to use his fortune cookie numbers to play the lottery.Gabriel Fierro, 60, picked up the cookie while … END_OF_DOCUMENT_TOKEN_TO_BE_REPLACED

Dear J.T. & Dale: Is the interview prep any different when interviewing with someone who would work on the same level as you or below you, versus … END_OF_DOCUMENT_TOKEN_TO_BE_REPLACED