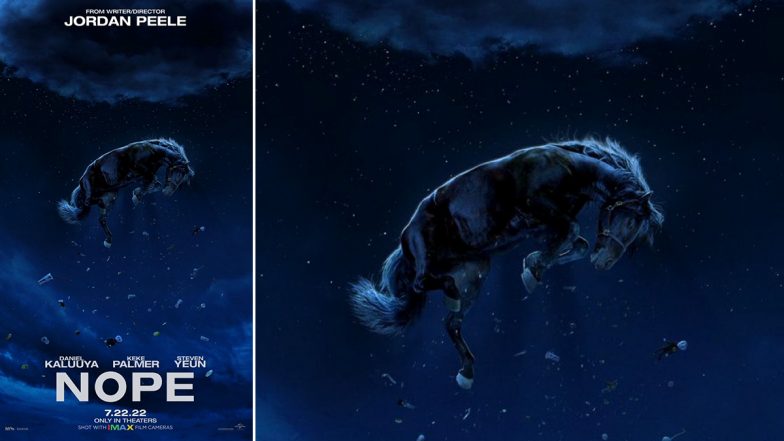 Actor-comedian-filmmaker Jordan Peele’s latest science-fiction thriller Nope has topped the US box office with its $44 million debut. Although the ticket sales were slightly behind projections of $50 million and fall in between the results of Peele’s first two films, 2017’s Get Out (which opened to $33 million) and 2019’s Us (which opened to $71 million), reports Variety. Nope Review: Early Reactions Call Jordan Peele’s Horror Film His Best Yet, Keke Palmer’s Performance Receives Immense Praise!

The film demonstrates the director’s popularity at the movies and marks a strong start for an original, R-rated horror film. According to Variety, Nope stands as the highest opening weekend tally for an original film since Us debuted more than three years ago. It includes Quentin Tarantino’s star-studded Once Upon a Time in Hollywood, which started with $41 million in July 2019.

Nope was made on a budget of $68 million, which is significantly more than Get Out (with its slender $4.5 million budget) and Us (with its $20 million budget). So the movie will require a little more coinage than Peele’s past films to turn a profit. Variety further states that Nope will not open at the international box office until mid-August.

The film reunites Peele with Get Out star Daniel Kaluuya – and adds Keke Palmer and Steven Yeun to the mix – in the story of siblings who live on a gulch in California and attempt to uncover video evidence of a UFO. Nope Full Movie in HD Leaked on TamilRockers & Telegram Channels for Free Download and Watch Online; Jordan Peele’s Sci-Fi Horror Film Is the Latest Victim of Piracy?

(The above story first appeared on LatestLY on Jul 25, 2022 05:01 PM IST. For more news and updates on politics, world, sports, entertainment and lifestyle, log on to our website latestly.com).

We were unable to send the article. A surgery center in Springdale sold for $2.6 million. Willow … END_OF_DOCUMENT_TOKEN_TO_BE_REPLACED

U.S. chip designer Qualcomm Inc on Thursday said its automotive business “pipeline” increased to $30 billion, up more than $10 billion since its third … END_OF_DOCUMENT_TOKEN_TO_BE_REPLACED