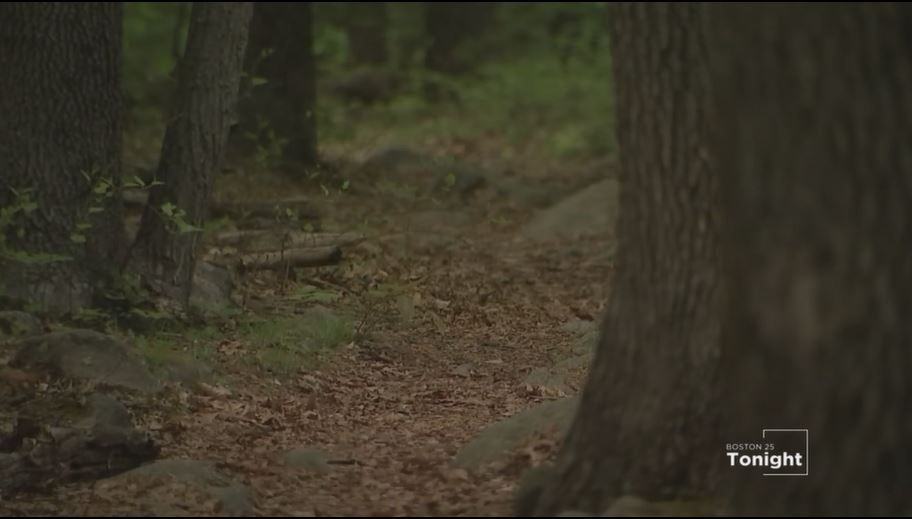 HOLBROOK, Mass. — It was both the entrance and the exit a mom and her two young kids use whenever they hike through Holbrook Town Forest, but when they entered Thursday, a coyote wouldn’t let them leave.

It was supposed to be a 30-minute hike through the woods with her 8- and 6-year-old; it turned into a 30-minute stare down with a coyote.

>>>MORE: Yes, it’s true: Pollen is worse than ever

“There’s no real exit point nearby,” Nieves said. “I was kind of scared, but you run through your head like, ‘alright what’s the likelihood that I could put a coyote in a headlock?’”

The family said there wasn’t much separating them from the coyote except for about 15 feet and a little bit of trail. We asked mom Catherine Nieves to send a picture of the coyote, but she said she couldn’t because she never wanted to take her eyes off the animal.

“It was like a solid 30 minutes that it was just kind of like a faceoff type situation,” Nieves said. “We backed up, but I didn’t want to take my eyes off because there’s a decent-sized grassy area.”

During the staring contest, mom called for help and a Holbrook officer guided them out.

“He walked out through the three feet of water and caught up with us here, and then he walked with us through the forest in dress shoes,” Nieves said. “I got blisters watching.”

Five minutes before the officer showed up, there was one more scare.

“The coyote actually took off down the trail in the direction that we would be heading,” Nieves said. “We came out the way that we came, except this time I wasn’t so worried about my youngest child being a snack.”

Nieves said she has plenty of hiking equipment, even a knife that she would normally go there with but thought she would be in and out in 30 minutes. Because she didn’t bring anything with her, that 30 minutes turned into a couple of hours, but she said that won’t stop them and they’ll definitely be back.

After meeting in the Baltic Sea resort of Weissenhaus, senior diplomats from Britain, Canada, Germany, France, Italy, Japan, the United States and the … END_OF_DOCUMENT_TOKEN_TO_BE_REPLACED

Nairobi [Kenya], May 15 (ANI): Environmental methane emissions are fuelled by the natural burps and belches from livestock ruminants like cows, … END_OF_DOCUMENT_TOKEN_TO_BE_REPLACED