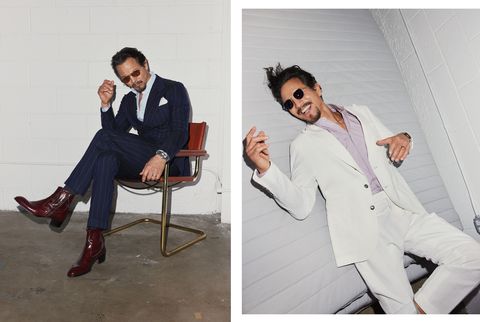 Since his breakout as Paco in Taylor Hackford’s Blood In Blood Out, Benjamin Bratt has been a familiar and friendly face in cop shows, romantic comedies, and whatever Halle Berry’s Catwoman was. He’s twenty years and two kids into his marriage with model and actress Talisa Soto, whom he met at the Blood In Blood Out audition. And nearly thirty years after that movie, he’s Parco, a charismatic gang leader in a war-torn Manhattan, on Ava Duvernay’s DMZ, which is now airing on HBO Max. Esquire’s Dave Holmes spoke with him about the challenges his family has faced, the commitment to kindness that’s gotten them through, and how that kindness nearly cost him his latest project.

Dave Holmes: When we meet you character Parco in DMZ, he’s seasoning meat on a skewer. Is he a gourmand? Are you?

Benjamin Bratt: That scene is an early indicator of what life is like in the DMZ. Here’s some meat, which was taken by hunting a deer in Central Park, most likely. And here’s a fancy French rock salt that is hard to come by. I might have you beat in years, but do you remember a film called Soylent Green?

BB: I saw that film at the drive-in that my mom would take us to, as a form of babysitting. Probably inappropriate in hindsight.

BB: There’s a scene where Charlton Heston has been out on a scavenger hunt, and he brings home a jar of dark goo and Edward G. Robinson takes the top off and takes in the aroma of it, and it’s a teaspoon of strawberry jam. Soylent Green takes place, I don’t know, far into the future where there’s no food source other than this shit called Soylent Green.

BB: And it speaks to exactly what we’re talking about, which is all these things that we actually now take for granted: organic apples and pears, fresh cheese and fresh dairy and black truffles and a little bit of shaved Parm. That doesn’t exist in the DMZ. Parco, being who he is, has access to things that you might not.

DH: I’m about to ruin your day, Benjamin. The movie Soylent Green is set in the year 2022.

DH: I am very serious.

BB: I guess it fits.

DH: Let’s talk about something else. You’re working a lot.

BB: Do you really think so? This is going to be fascinating for me.

DH: We may not see you in four things a year, but I don’t think of you as someone who’s struggling. It seems like you have the luxury of choosing carefully. Is that accurate?

BB: That is a perception I share. Early on as an actor, I had this notion of ascension: There’s a track you must follow, and you reach a plateau where you will consistently work. I’ve gotten to that plateau. I had always hoped it was going to be at a higher elevation.

BB: It’s not a question of ability or training or experience. That’s why that question of perception is so intriguing to me. With DMZ, when Ava DuVernay thought I would be the right person to play Parco Delgado, she got some pushback from the network, something to the effect of “He’s too nice to play this role.”

DH: So what do you want that you don’t have?

BB: Consistency. For thirty-odd years, without fail, at some point something really lovely has dropped out of the sky: an opportunity to work with Steven Soderbergh, or Taylor Hackford, or Sandy Bullock, or Meryl Streep, or Tilda Swinton, or Javier Bardem. I’m grateful for those opportunities. I just wish there were more of them.

DH: Where are you right now?

BB: I’m sitting by my kitchen window in Greenwich Village. My wife, Talisa, and I lived here until around ’07; took off for the West Coast; found our way back to western Massachusetts, where her family is; and then just before Covid struck, we had the idea to relocate back to the city.

DH: What was your routine in western Mass?

BB: We still keep a place there. I’ve never really spoken about it publicly, but to contextualize our lives: Almost everything we do, every decision we make personally and professionally, is informed by our daughter, Sophia, and her needs. She incurred a brain injury at birth, so she faces a host of challenges. She’s nineteen now, and we’re working to help her gain independence. We’ve lived this kind of vagabond lifestyle in search of the best therapies, the best schooling, the best social situation for her. We’ve moved thirteen or fourteen times. In New York, there’s an amazing transitional program that helps her with how to function: how to go shopping, how to use money, how to buy groceries, how to fold and put away clothing, how to cook a meal. She’s an amazing young woman, very spirited, very competitive. Raising children, especially one who is as challenged as our daughter, is physically and emotionally exhausting. My wife carries the brunt of it, because when I go off to work, she is left behind. She’s my hero.

DH: How did you meet?

BB: At an audition for a film called Blood In Blood Out in the early nineties. She was a very famous model and actor; she was a Bond girl. Within six months after consummating our affair, I got down on a knee and proposed. Falling in love with Talisa cemented what I’ve instinctually always known: Above being an artist, even above defining myself as an actor, I see myself as a husband and a father first. I don’t know if that’s been a hindrance or a help in terms of the professional path I’ve been on, but at this point it’s hard to really care too much about it.

DH: What is the kindest thing that has been done for you?

BB: My wife loving me.

BB: It’s funny—I asked her if it was cool with her if I spoke about her today, and she said, “What are you going to say?” And I said, “I want to share with David that you’re my daily inspiration.”

DH: That was thoughtful of you.

BB: Most people don’t know her. If they see her, what they see is a spectacularly beautiful woman who worked in the business. But to know her is to really love her. She was diagnosed with breast cancer just over a year ago in the fall, and she’s battled through it and she’s really fine now; she’s on meds for it. But it really shook us, it really rocked our world, not just within our immediate family but all of those around us who support us—our friends, our family members, the teams of therapists and educators who worked with us. It made us realize that we perhaps take her strength for granted. I know that I have for the twenty-something years we’ve been together. I think of her as almost superhuman. And I know that’s not fair, because I have this expectation that she is always there because she tells me she is always there. And then she proves that she is always there and she makes me feel loved. And her love for me, her expression of her love for me, it gives me center, it gives me anchor. It gives me the ability to go out into the world often when I don’t want to face it and do what I have to do to get through and take care of business for myself and for our family. She’s my biggest cheerleader. She reminds me that I have value and that I’m loved. And I can’t imagine a greater act of kindness than that.

DH: You’re doing a photo shoot for Esquire tomorrow. Is that fun?

BB: Not really. I feel anxious about it until we actually get into it. I love clothes, and I’m sure if they have good music on, it’s going to be fun.

DH: What are you listening to?

BB: Moses Sumney. I don’t even know how to describe it, but the harmonics of his voice are very haunting. The one thing I did get from my father, living with him for a short period in the seventies, was a real eclectic taste for music. He would play everything from Hank Snow to Roberta Flack, Gladys Knight, the Eagles, Joni, of course, Dobie Gray, Pete Seeger, Burl Ives.

DH: It’s a tragedy we never got the Roberta Flack and Burl Ives collaboration the world needed.

BB: Yeah, but you got Tony Bennett and Lady Gaga.

BB: I’m a sensitive person. And for whatever reason—and it’s been freaking me out lately—I cry more often than I want to.

BB: I don’t know if it’s the nostalgia of my childhood, or Christopher Plummer reminding me of my father, but the other day I caught a scene with Christopher Plummer and Julie Andrews from The Sound of Music. I was glued to the screen for about four minutes, and I realized that my face was wet. I said, “What the hell is going on?” My son makes fun of me because I’m always telling him how much I love him. In the moments that I did spend with my father, although he had this very gruff male persona on the outside, you gave him half a bottle of wine and he’d put on Roberta Flack and become deeply philosophical. He would come over to me and my brother Peter and he’d say, “Ben, Pete, you got the world by the ass.” He was essentially telling us that we had no idea of the potential we possessed. He could only do it when he was loaded, but it was his way of saying, “I love you and I am so hopeful about what awaits you.”

SHAWNEE TOWNSHIP — Bob and Connie Sutherland have been in the swimming pool business for 53 years, and it all started from an ad in the … END_OF_DOCUMENT_TOKEN_TO_BE_REPLACED

Washington [US], May 21 (ANI): According to a new Cornell research, Cnidocytes, also known as stinging cells are characteristics of Corals and … END_OF_DOCUMENT_TOKEN_TO_BE_REPLACED